Faster, heavier & louder! That was the motto when we formed Torch back in 1980. Chris , Claus and Steve played in a Black Sabbath-influenced band called Black Widow, When the singer/bassplayer left the band., Ian joined the gang and a new singer was also recruited. Torch was formed. We grew up listening to Black Sabbath, Deep Purple, Thin Lizzy, Judas Priest and Van Halen and we were inspired by the new groups of the NWOBHM. Our approach was ”more is more” and our goal was to become the fastest, heaviest and loudest band around. 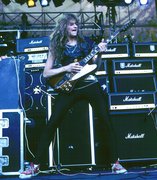 We rehearsed day and night and started writing our own songs. Steve came up with the riffs and the chords of the song, Chris arranged them and Ian added the lyrics. The rest of the band then provided ”the icing on the cake”. This was the formula that we used for most of our songs throughout Torch existence. As soon as we had a set of songs we started playing gigs. Our first ever show was in February 1981. We also applied the ”more is more” principle to our stage show with lots of smoke and pyrotechnics, which unfortunately caused our original singer to lose his voice after only two gigs. Luckily enough we quickly found Dan Dark, a small singer with a big voice and a crazy stage personality. With Mr Dark in the group, all the pieces fell into place and we were off. We always got the biggest kick out of playing live, and we made sure that our fans got their money’s worth when we performed. Soon we had developed a loyal fan base from our intensive gigging.

The next big goal was to land a record deal. Heavy Metal was not in fashion at that point in time and for a Swedish Heavy Metal band to sign a record deal was almost impossible. We started recording demos, sending them to record companies that totally ignored them. Luckily enough our demos caught the attention of producer Thomas Sunmo. Through Thomas help, we were given the chance to record our first 5-song EP. The idea was for the record company to find out if there was a market for Torch music, before they signed us for a proper album. The EP was recorded in approximately one week, with Thomas Sunmo handling the production. The basic tracks were all played live in the studio. To this we just added vocals and solos. This really makes it more of a live record than most of the ”live” albums that are released. When the recording was done it was time to decide on a cover. For some reason we’ve always had problems with record-covers. The original cover that the record company suggested had a bunch of laughing rats with a mechanical cat/tiger looming in the background. It also said that we were ”The Torch” – which sounded like a 60s band or a punk band. Eventually we managed to convince them to get rid of the rats and the ”the”, but the tiger had to stay. 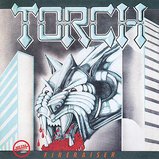 The EP was released in 1982. Despite being a low-budget project, the EP sales exceeded all expectations. The first pressing sold out immediately and all of a sudden we had fans all over the world. Part of the popularity of the record was probably due to the sheer energy, but also because of some ”Torch classics”. ”Threshold of Pain” was so popular that we decided to re-record it for our first album. ”Fireraiser” was a live favorite that we usually played as an encore and ”Retribution” was a great set-closer that allowed Claus go off on a ”whammy-bar orgy” a la K K Downing. This EP opened a lot of doors for us and convinced the record company to sign a proper deal with us.

We then went on to write material for our first ”proper” album, while continuing to play gigs. In 1983 we recorded our first album. This was recorded in the same studio as the EP, with Thomas Sunmo handling production once again. The formula was the same as for the EP. Live basic tracks with added vocals and solos. The difference this time was that we were allowed more studio time and a better studio for mixing. In true Torch tradition there were again issues with the cover. The title of the album was supposed to be ”Sinister Eyes”. The record company suggested using the same artist as we used for the EP. The idea was that he was going to paint a beautiful woman with ”sinister eyes”. When they presented the result to us we were shocked. Instead of a beautiful woman there was this blue ”thing” that looked like it was about to be hit by a car. We rejected it, but the record company was very happy with it. In fact they were so happy with it that they celebrated with the cover artist. If you look closely on the cover you can see the stains from were one of them tipped over his whiskey glass. They also forgot to put the title of the album on the cover – slight mistake.

This first album contained many ”Torch classics”. ”Warlock” is probably our most popular song. “Beauty & the Beast” is another favorite and so is ”Battleaxe”. ”Sweet Desire” was a live favorite and ”Watcher of the Night” became a hit with a lot of fans that later moved on to thrash/speed metal. That scene had just started when we recorded the album. We weren’t really aware of the whole movement that created bands like Metallica and Megadeth, we just wanted to write a really fast song. By coincidence we were later on the same label as Metallica (Music for Nations) and we released our second albums at the same time – both with electric chairs on the covers (although ”Ride the Lightning” sold a couple of more copies than ”Electrikiss”). 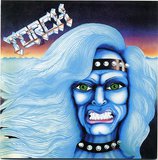 The album was released in 1983. It received good reviews and started selling well. Our fan base grew dramatically and we had a good following of die-hard fans in countries like Holland, Belgium, Japan and the US (only no one told us at the time – Claus found out when he later moved to L.A.). The release of the album was followed by a Swedish tour with Axewitch and Silver Mountain (with Anders Johansson from Hammerfall) and lots of other gigs.

Then it was time to start writing material for the next album. Any band will know that the second album is the hardest. You’ve got years to write for the first album, to try the songs live and to fine-tune them. For the second album you’re supposed to outdo the first album - but you only have a couple of months to write the material. Writing material for the second album was very challenging to us, especially as we wanted the music to take a new, heavier direction. The record company told us that they had great plans for us. They had recently signed ”Easy Action” to Warner Brothers and they wanted something similar for us. They would bring in big-shot producer for the album and then make sure that we got signed to a major company. All this sounded great, except – we had no songs!

Soon enough the record company started to put pressure on us. They wanted us to record a couple of new tracks that they could pass on to producers in order gain their interest. We reluctantly agreed and recorded the ”skeletons” to three new songs we were working on. The record company ensured us that they would never be released, so we shouldn’t worry. They later informed us that they planned a ”limited release” to get their money back, and there was nothing we could do about it. This became the “Unreleased tracks” EP - if you don’t like the tracks…..don’t blame us! One of the tracks (”Bad Girls” ) eventually made it to the ”Electrikiss” album, but heavily rearranged.

The whole ”Big Shoot Producer” thing fell through, so we decided to record with Thomas Sunmo once again. This time around we had a better studio and more time, which allowed us to record all of the instruments separately. Unfortunately, we lost some of the ”live feeling” of the first records when we used this approach. Despite spending more time on “Electrikiss” than the other records, it’s probably the record we’re least happy with “soundwise”. At that point in time everything was supposed to sound ”big” – like you were playing an arena. It was an 80s phenomenon and today those records sound very dated. So does “Electrikiss”. They biggest issue with “Electrikiss” though was the fact that we didn’t have enough songs. That’s why the album is so short, and contains some tracks that are not really good enough. We’re still proud of songs like “Electrikiss”, “Thunderstruck” and “Bad Girls”, but other songs are too ambitious (“Limelight”) or just plain boring (“Vicious Love”).

We were actually very close to having a guest appearance by Mötley Crüe on the album. They were in Stockholm to play “Monsters of Rock”. After lots of beers at a party, Nikki Sixx promised that they would show up. Unfortunately that never happened. Maybe the fact that Dan bit Tommy Lee in the balls discouraged them. This time around we didn’t trust the record company with the album cover, so we designed it ourselves. A hot babe and an electric chair seemed logical for an album called “Electrikiss”. The model’s name was Mia, and she was stunning. We can only imagine her surprise when she met us - five guys with leather pants and a homemade electric chair (Dan built it).

Before releasing “Electrikss” we embarked on a European tour with bands like Warlock (Doro), and had the opportunity to play legendary venues like the “Paradiso” in Amsterdam. Some high points from this tour include Steve passing out during a gig (he regained consciousness when his head hit the snare drum) and Dan refusing to do an encore because his teeth was falling out of malnutrition.

The album was released in 1984. Although it sold well, it didn’t break us the way we hoped it would. During 1984 and 1985 we followed this up with more gigs, including a very short Nordic tour with Motorhead. We were actually dropped from the bill after the first gig! The audience and Lemmy liked us, but Steve decided to trash his drumkit at the end of the last song, - which made the soundguy go ballistic. He chased Steve around backstage and then demanded that we we’re kicked out of the tour.

We also participated in “Swedish Metal Aid”, a “Live Aid” –type initiative to support the starving in Ethiopia. It was a nice thought, but most bands were only interested in the publicity (and the free burgers and beers). We were no different. When it was broadcasted on TV, we even put on tuxedos to stand out from the rest of the bands.

At this point in time, things started to go downhill for Torch. We always loved to party, and even had a reputation of being a Swedish Mötley Crüe. Unfortunately, we now started to focus more on the party aspect and less on the musical. To make things even worse, Dan started losing interest in Torch, and then finally quit. The rest of us wanted to carry on. We put ads in for a new singer and went through tons of tapes. We were actually close to signing with the singer from a band called Kingpin (home of Tim Skold of Marilyn Manson), but things didn’t really “click” at rehearsals. Dan Dark was a hard act to follow.

As Claus was getting ready to move to L.A., we decided to put an end to Torch. In 1986 we all got together for one final gig. The gig was at the same small club, where we once started back in 1981. That was the last time Torch performed together.